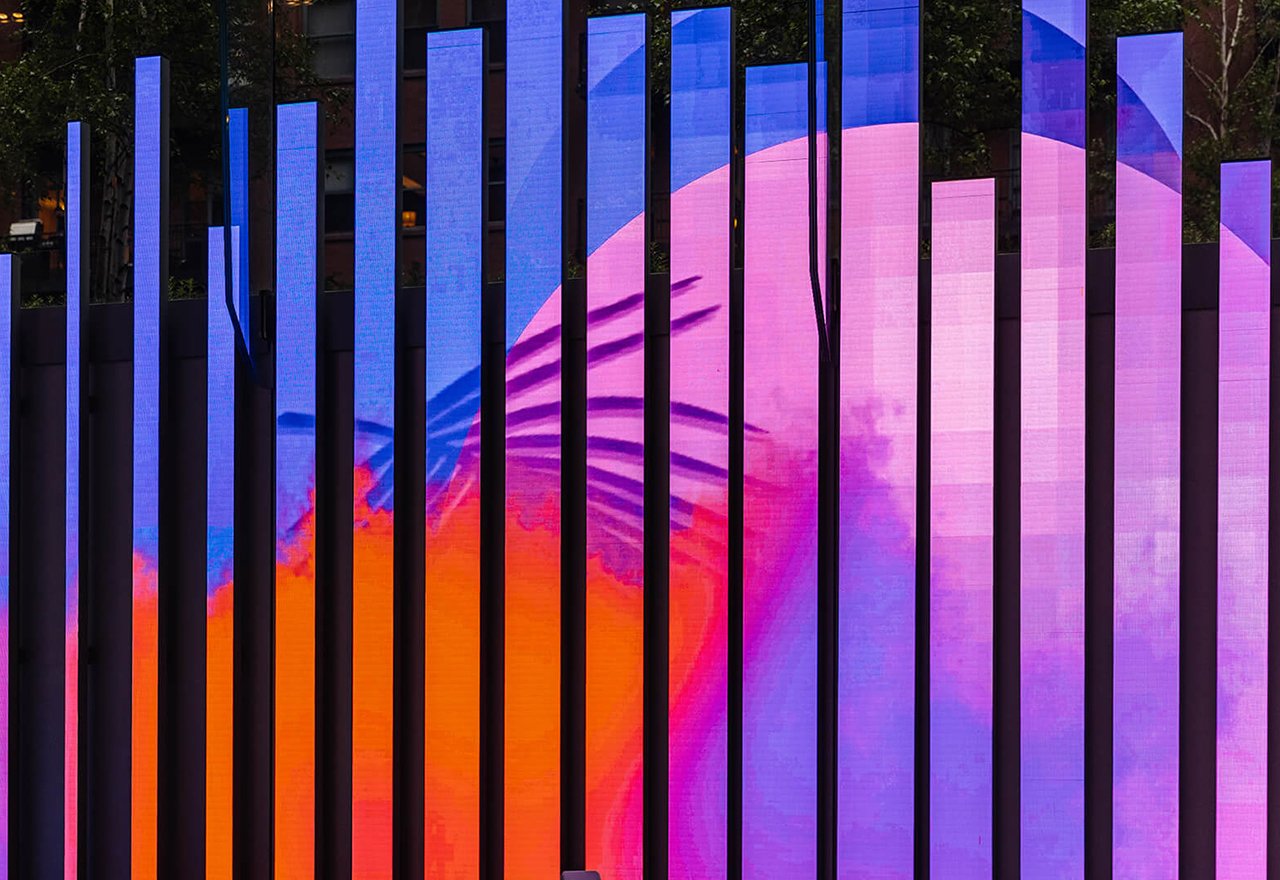 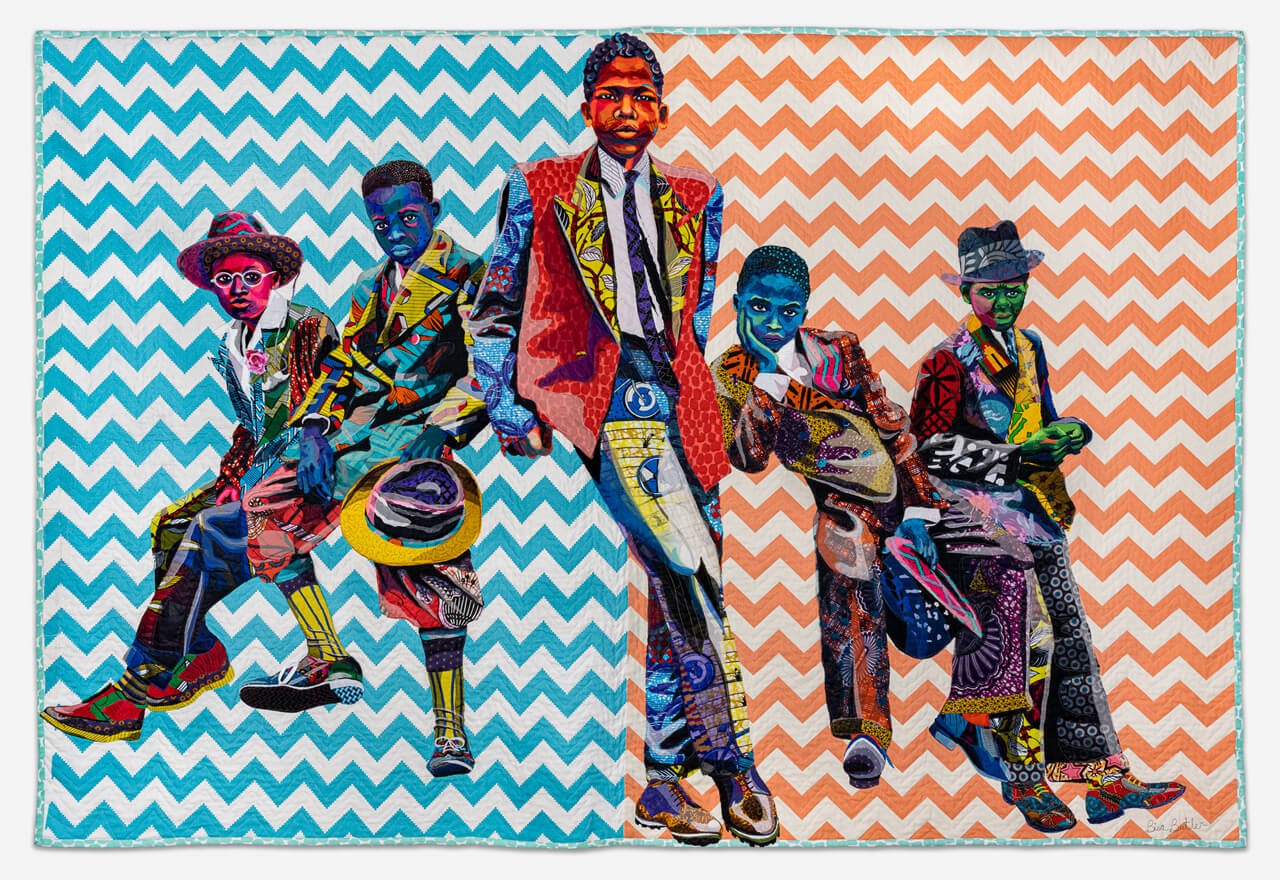 “Out To Lunch” is a site-specific video installation by Sarah Brophy with sound design by Zheyu Pi that imagines screensavers as the computer’s conscious dream-state and uses imagery to frame daydreaming as a valuable and generative function. Familiar screensaver themes from the past are fused with new illustrations inspired by the screen’s surroundings to create a painterly dreamscape. The project, selected via a student competition, was produced in partnership with the Video Installation class taught by Peter Burr at the School of the Art Institute of Chicago (The Film, Video, New Media, and Animation Department).

Your statement about “screensavers as the computer’s conscious dream-state” has a poetic sense of personification. What inspired you to use the sleep mode of screens as an artistic medium?

Sarah: I am primarily interested in using the screen, and the computer’s “brain”, as a vehicle to frame dreaming as a generative and productive function of the mind. I’m really fascinated by the aimlessness and eccentricity of retro screensavers, and how they feel so at odds with our modern-day perception of computers as the ultimate tools of productivity and usefulness. When I was thinking about what kind of piece would make sense for this screen and its primary audience of people working in this building, I was thinking about how the lobby functions as a critical site of transition for workers switching between personal and professional headspaces. I wanted to make a piece that allows, or even encourages, intentional disconnection from task-oriented thought patterns where people can let their minds wander and slip into a dream-like meditative state. When forming daydreams, the human mind melds memories and real-time environmental information to create new narratives, so Out To Lunch resurfaces familiar screensaver themes from the past and fuses them with new illustrations inspired by the screen’s surroundings to create a whimsical, painterly dreamscape. Hopefully this illustration of the screen’s lucid dream will encourage viewers to allow themselves the time and space to explore their own subconsciouses.

Why is the piece called “Out To Lunch”?

Sarah: The piece is called Out To Lunch because the work is trying to create a meditative mood for people transitioning between personal and professional head spaces while they’re in the lobby, and perhaps coming and going from a lunch break. But “out to lunch” is also a phrase that refers to someone who is disconnected from the real world, which relates to the piece’s theme of lucid dreaming.

How was the project conceived and developed within the context of the video installation class at the School of the Art Institute of Chicago? How did the class critiques and the guidance from your professor Peter Burr affect the project?

Sarah: This project opportunity was introduced in the very first class, and by week two we were creating proposals, so for me, the creation of Out To Lunch is completely connected to this installation class. I was in a really fortunate position where I could regularly share progress of my work with a group of people who were watching my project grow from a concept to a finished work, and this unique insight and consistency over the course of several months generated really helpful feedback for me that felt different from other critique experiences where I just presented a finished piece. I’m really grateful to Peter and my classmates for helping me in this way. Alongside producing installations, we were also reading and learning about related topics including the history of expanded cinema, site-specificity, and spectacle. I think these subjects affected my work for 150 Media Stream both directly and indirectly. This class has really made me think about video installation art more critically and intentionally, and Peter has been a generous and supportive mentor in this process. 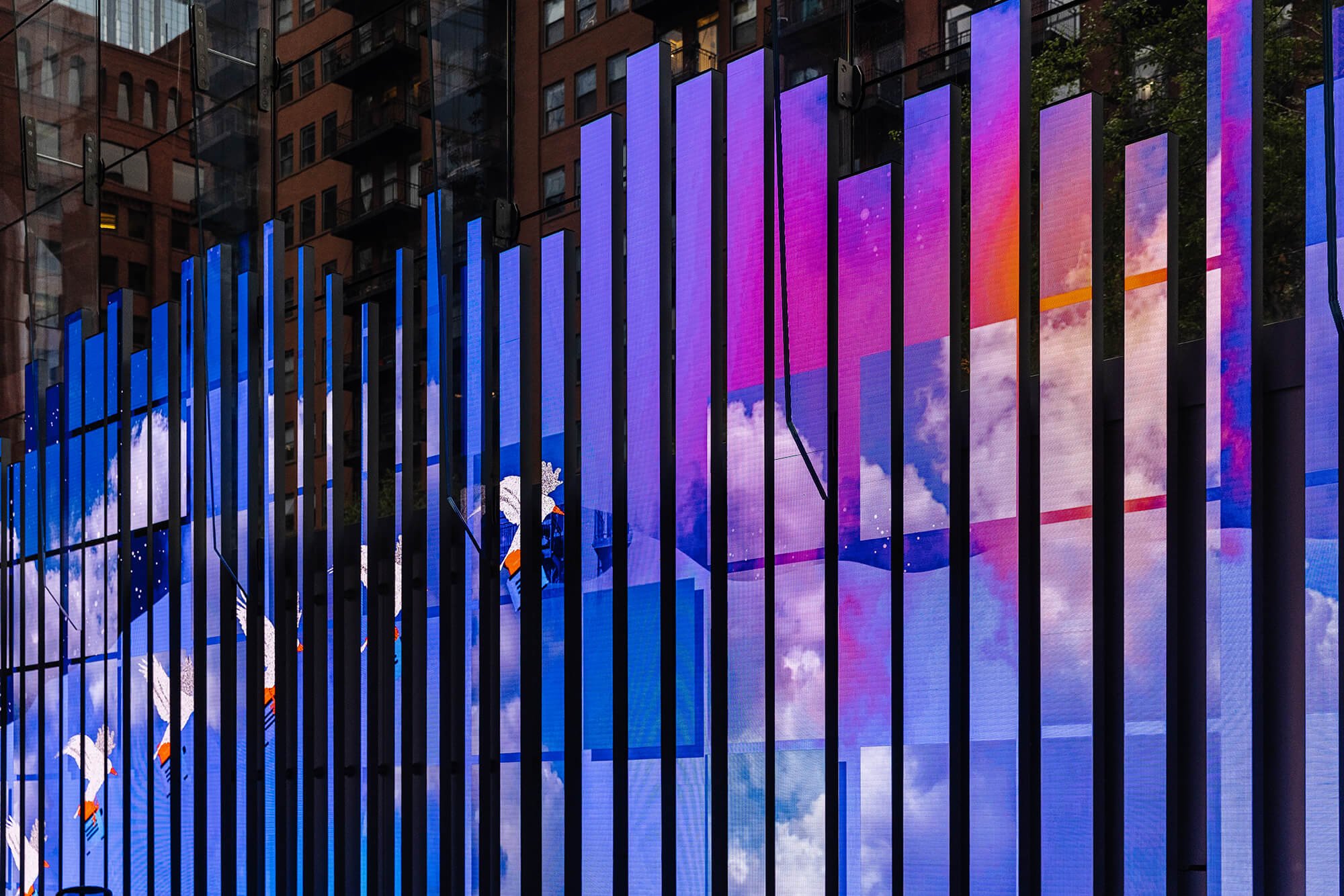 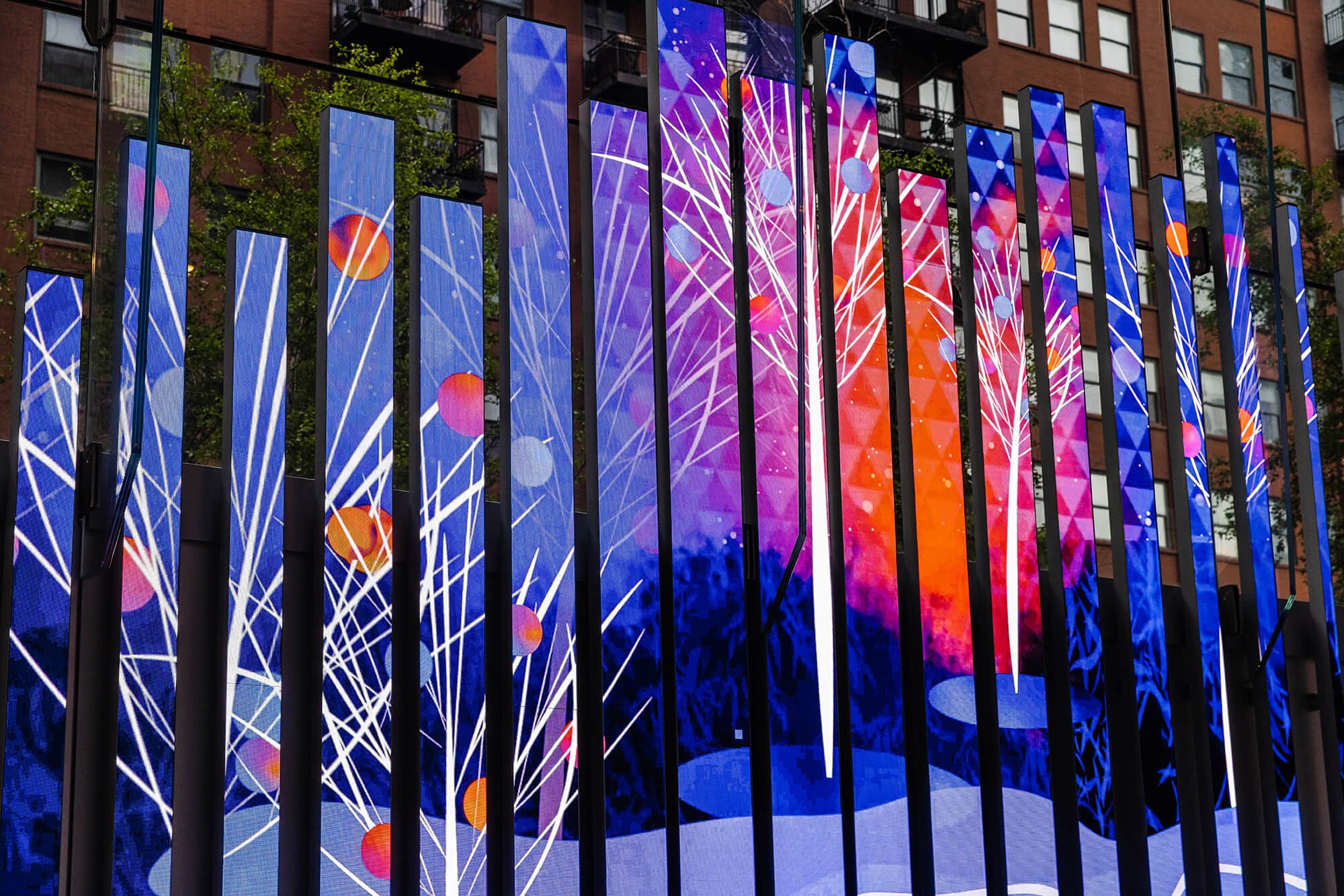 There’s a year left in your studies at the school. Do you plan to continue to work in projects involving technology and digital media? If so, what themes and contemporary issues most interest you?

Sarah: I definitely plan to continue working with video installation in my next year at SAIC and am currently trying to expand my toolset for creating animation work. I’m taking classes in Maya and Unity and am interested in experimenting with the capabilities of mixed and virtual reality within moving image experiences. In terms of subject matter, I’m interested in exploring the relationship between spirituality and abstraction and the creation of contemporary myths. 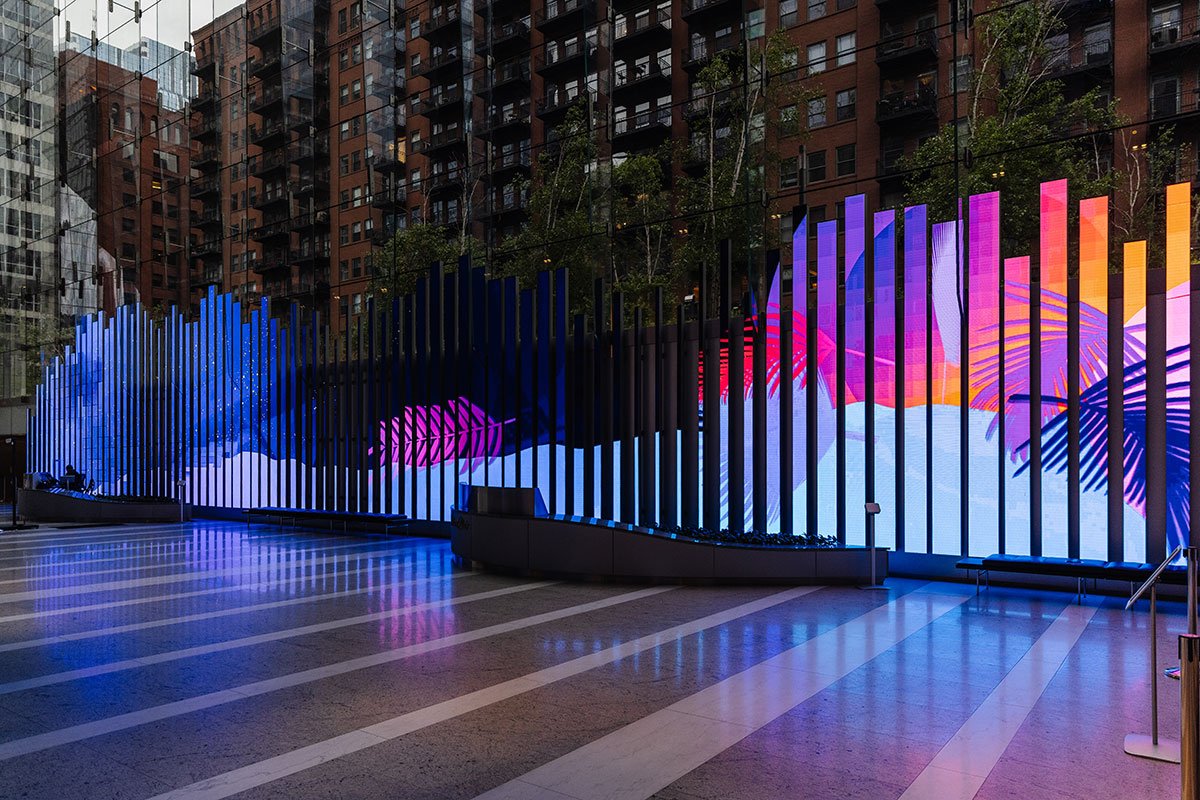 What is the concept behind the sound design?

Zheyu: In keeping with the theme of the piece, “computer dreaming”, the soundtrack to Out To Lunch chose to avoid acoustic instruments or analog samples and instead used synthesizers and digital sound effects to create a special soundscape. The minor use of mimicking additive synthesis, from the singing of birds to the rustling of leaves, enriches the multiplicity of sounds, presenting an immersive, surreal experience. The long, echoing synthesizer provides an even more meditative atmosphere, enhancing the aimlessness emphasized in the piece itself, liberating the mind out of reality through the healing effects of the sound. 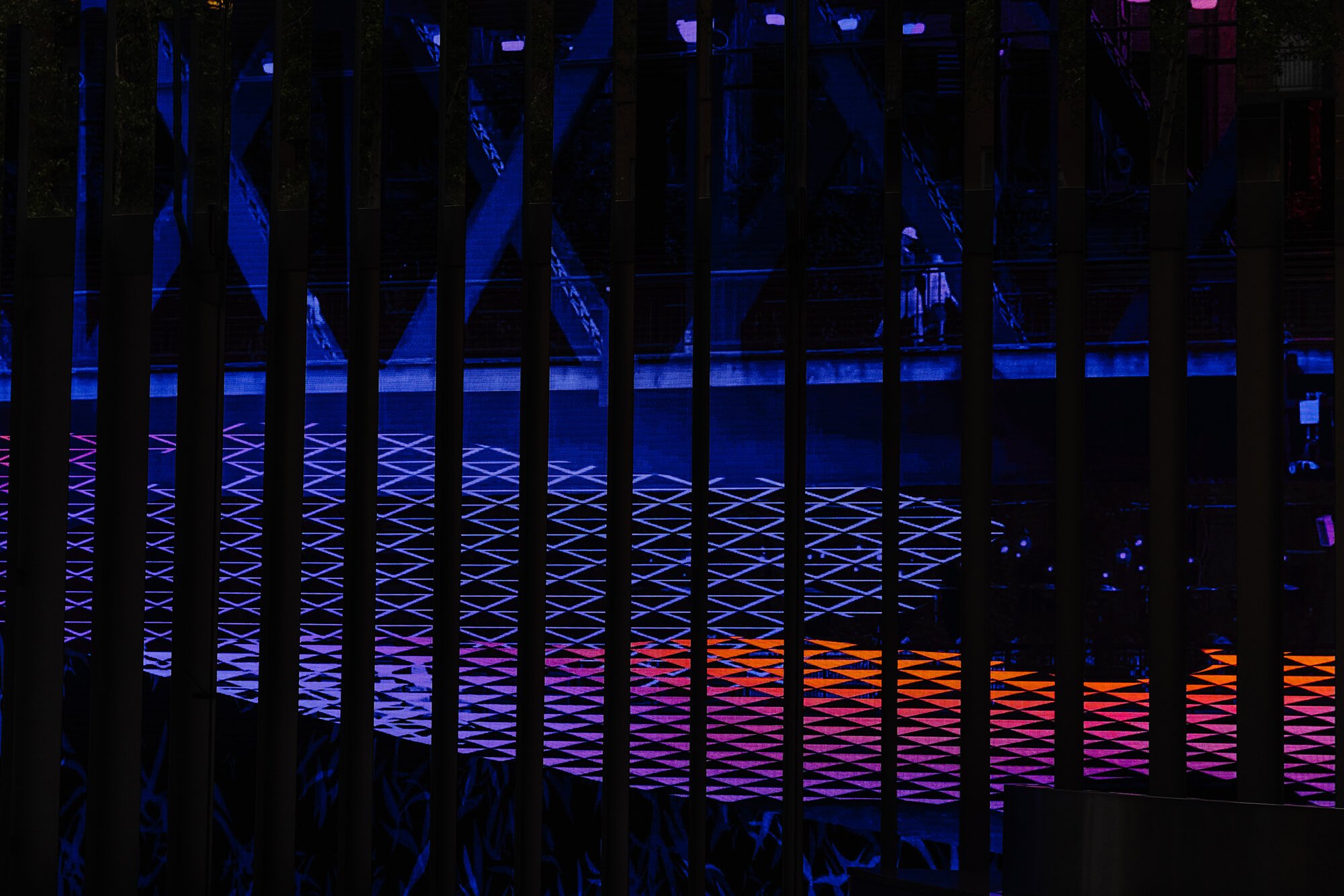 About Sarah Brophy:
Through the activation of geometric shapes, found patterns, and hand drawn expressions, Sarah Brophy’s video installations create sensory experiences that consume space in unexpected ways and test the transcendental capabilities of 21st century technology. She has exhibited public video works internationally, including an award-winning piece for the Berlin Festival of Lights and multiple commissions for Boston’s Art on the Marquee Program. Sarah received her BA in Studio Arts from Bard College and is currently pursuing her MFA in Art and Technology Studies at the School of the Art Institute of Chicago.

About Zheyu Pi:
With a background in Architecture and Art and Technology from the School of the Art Institute of Chicago, Zheyu Pi’s sound art focuses on the creation of a sense of space and the emotional experience of interacting with an audience. In his work, he often presents “unnatural” organic sounds created through additive synthesis to achieve a detached yet combined ambiguous quality. The skillful use of synthesizers allows for a sense of space and meditation to be easily expressed in his works, which are often described as “otherworldly sounds.”

In conjunction with American fiber artist Bisa Butler’s solo exhibition “Portraits” at the Art Institute of Chicago, 150 Media Stream is featuring an animated version of Butler’s quilted artwork Southside Sunday Morning. In all her work, Butler creates arresting portraits—composed entirely of vibrantly colored and patterned fabrics—that reimagine and celebrate narratives of Black life. The inspiration for Southside Sunday Morning was a photo taken by Russell Lee for the Farm Securities Administration on Easter morning in the Bronzeville section of Chicago in 1941. 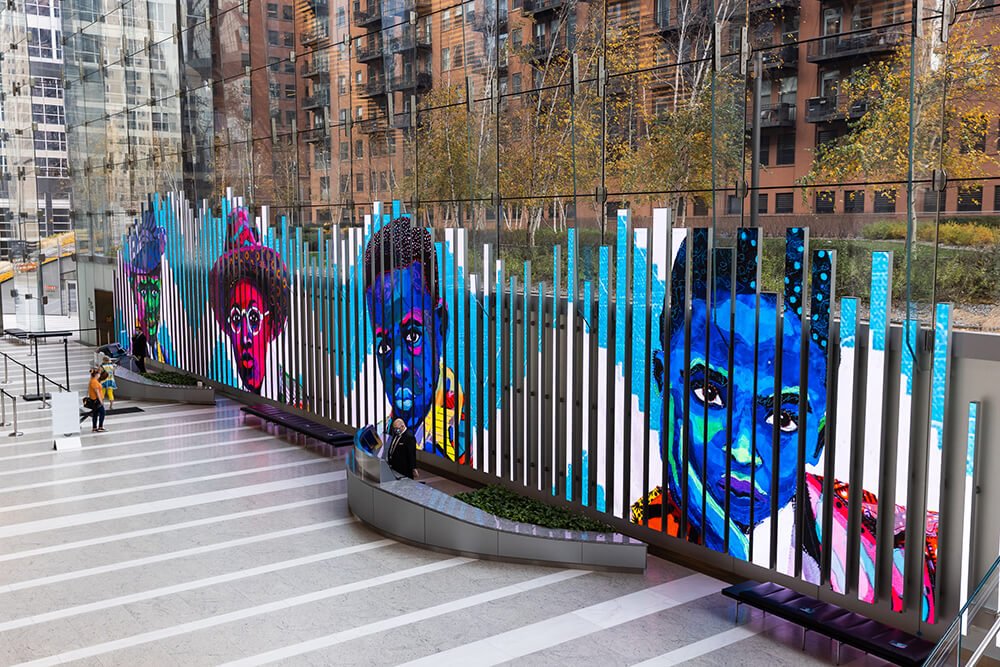 “I was inspired by the smartly dressed, handsome African American boys who had such youthful faces—but such grown up and dapper clothing. The way they are dressed indicates the effort their parents put into making sure that their children looked their best for church on Easter morning. The boys are flawless; from their freshly cut hair and waves all the way to their brand new shoes.” 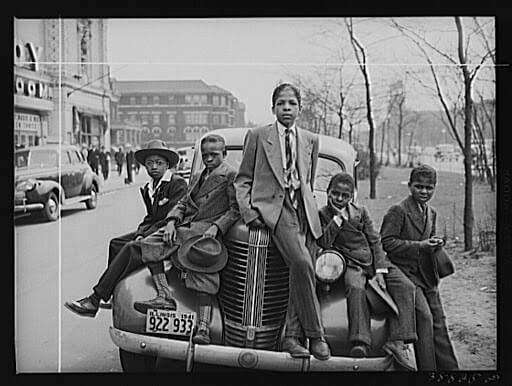 “I chose African Dutch wax fabric to illustrate that although these are American children, their roots are in Africa. The patterns they wear indicate their personal interests; for example, the boy in the middle has bicycles on his pants because I imagined that may be a favored pastime.

Another boy has Legos or building blocks on his jacket to show an interest in constructing things. The background fabric has an undulating chevron pattern that I’ve used to illustrate the frenetic energy of youth. Each child has a distinct and different color complexion because I want to show that while they are all Black, they are all unique. I use color to suggest a mood and a personality. A complexion of oranges and reds hint at a bold personality while blues and violets hint at introversion.

“I’ve called this artwork Southside Sunday Morning as an homage to the movie Uptown Saturday Night by Richard Wesley.”

The animated version of Southside Sunday Morning will be on view at 150 Media Stream from November 16, 2020 to April 19, 2021. The animation of the work to be configured for the 150 Media Stream was done by George Berlin Studios. 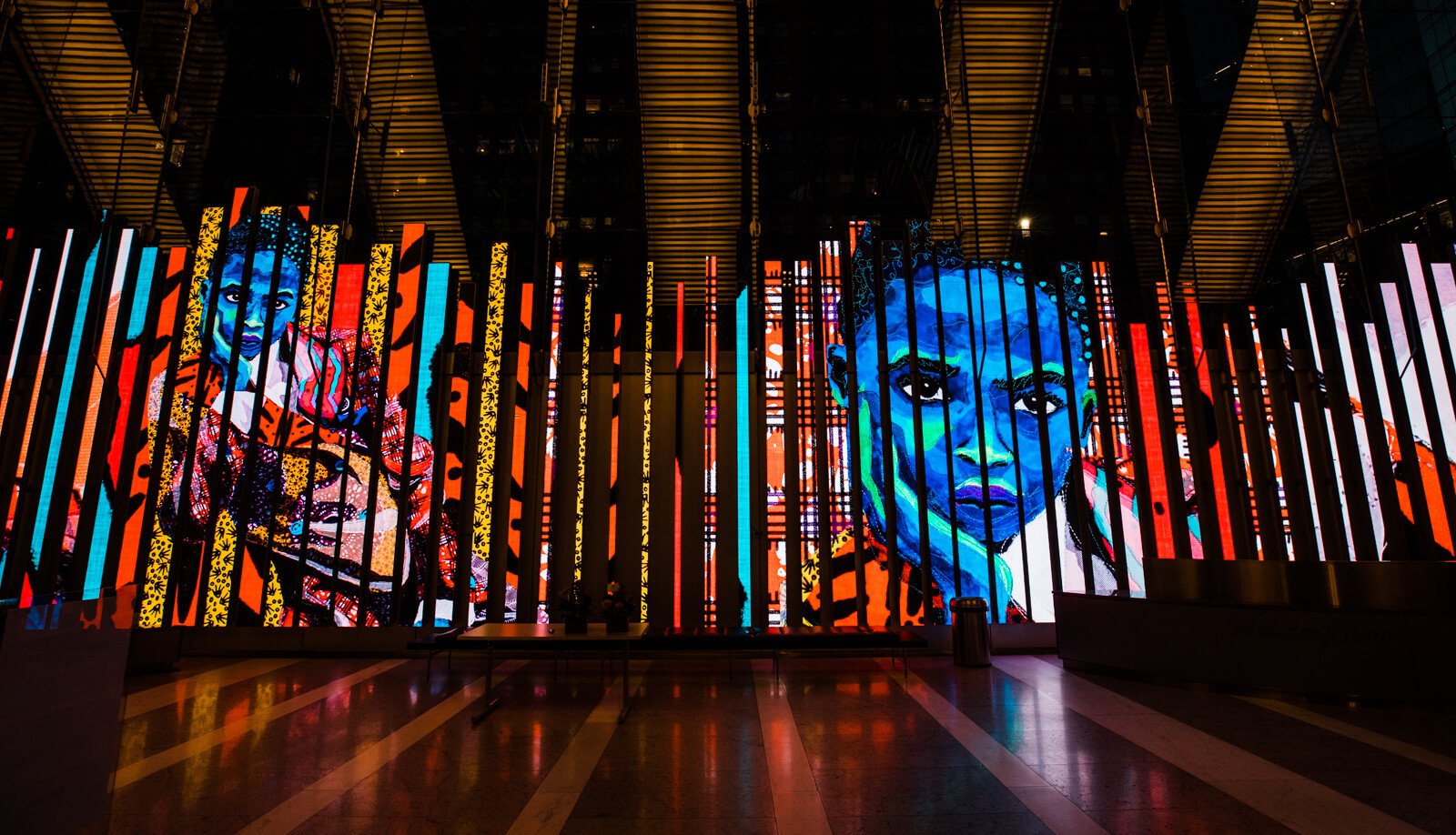 MORE ABOUT THE ARTIST 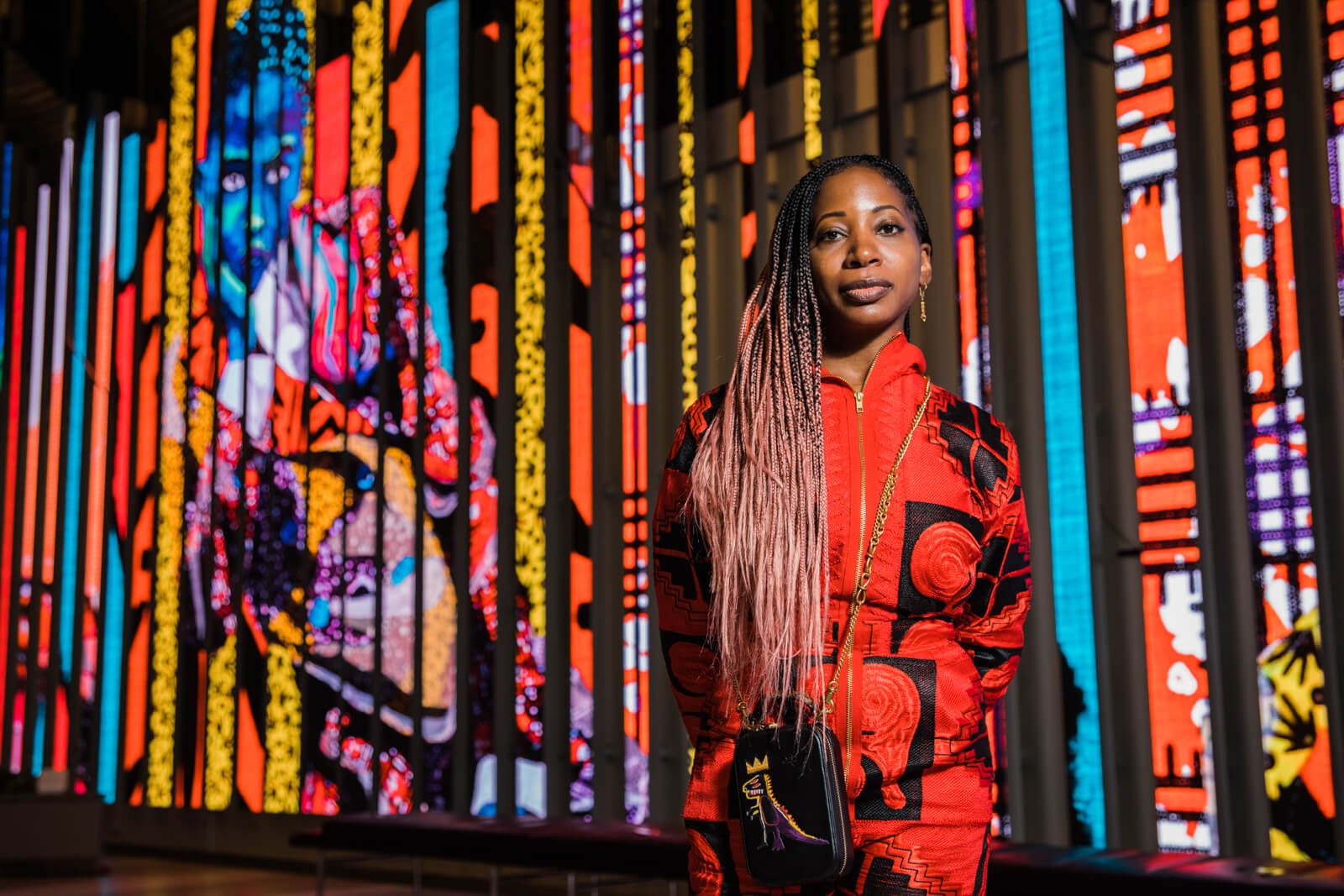 Butler often works with photographs as source images, reimagining portraits with layers of color and stitched details. She strategically selects fabrics, using the history or imagery of the prints to reinforce the stories she wants to communicate in each quilt. Layering materials and meanings, Butler brings to life personal and historical narratives of Black life and invites viewers to look closely and think deeply about the potential and purposes of portraiture. 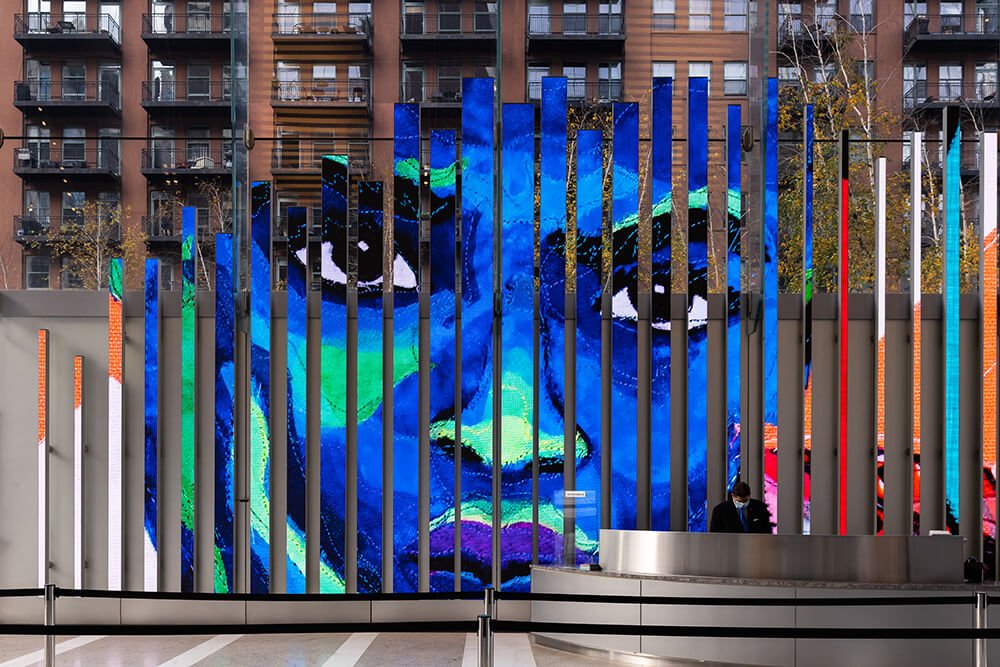 Butler’s work has been shaped by a variety of influences and experiences, key among them family photo albums, the philosophies of AfriCOBRA (the African Commune of Bad Relevant Artists, established in Chicago in the late 1960s), Romare Bearden’s collages, Faith Ringgold’s mixed-media quilts, and Gordon Parks’s photographs. Butler earned her BFA at Howard University, Washington, DC, and her MA in arts education at Montclair State University, New Jersey. Trained as a painter, she shifted to quiltmaking during her graduate studies, when she made a quilt in honor of her grandmother. She has exhibited in group and solo shows across the United States as well as in China, England, Japan, and South Africa.

In 2019, the Art Institute of Chicago acquired The Safety Patrol and is currently hosting the first solo museum exhibition of Butler’s work Bisa Butler: Portraits which includes over 20 portraits.

Click here to learn more about Butler’s solo exhibition at the Art Institute of Chicago.

Posted @sarahbrophystudio - “Out To Lunch” is ...

Repost @sarahbrophystudio - Less than a week until...

This past Tuesday we hosted a reception and panel ...

A thoughtful article on our current artwork ...

Repost @action_lines Looking for something to do ...

Thank you @abc7chicago for the spot on our ...

We can’t wait to start featuring the inaugural ...

Reposted @action_lines: Interim Avoidance will be ...